Busted! is a hybrid boardgame that combines Guesstures (charades), Blackjack, and a small element from Scattergories (category word puzzles). The goal of the game is to accumulate 21 points without busting as a team by acting out and correctly guessing silent clues.

A minimum of 4 people are needed to play. Theoretically, an unlimited number of people could play at once. However many decide to play, they must divide into 2 equal (or near equal) groups. Note: large groups may require the bust limit to be raised so everyone gets a chance to act.

the quick and dirty

1. Divide into two teams and name your teams
2. Someone from the first team draws four Action cards
3. S/he puts the cards into the slate and slaps it shut
4. S/he acts out the clues silently while everyone guesses
5. S/he gives each card to the team that guessed the clue
6. Each team decides to play the cards as positive or     negative
7. S/he rolls the die and the scores are calculated
8. Someone from the second team draws four cards
9. Repeat steps 3-7

The first team to score 21 points after the die roll wins!

how to play: the long version

Divide into groups and decide which group and person should go first (let's pretend it's David). 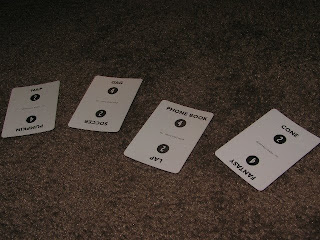 David draws 4 action cards (without anyone seeing) and decides whether he wants to play the cards as high or low (high values are more difficult). 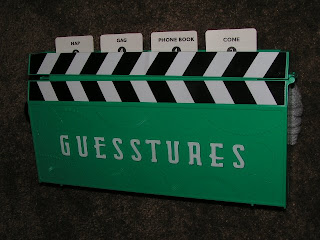 Next, David places the action cards into the slate with the first (leftmost) card being the easiest to act out and the last card (rightmost) the most difficult.

Then, David slaps the slate closed and begins acting out silent clues. At this point, everyone else begins guessing at the clue. If David's group member(s) correctly guess the clue, he must quickly remove the card and move on to the next card. David has to physically remove the card before it falls into the slate in order to gain the card's points. David's goal is to have his team guess each card correctly before it falls into the slate.

David's turn ends once the slate become empty either by cards falling into it or being removed. Once this occurs, David collects the correctly guessed and Reclaimed cards and gives the Stolen cards to the opposing team. Then, both teams decide if they want to play their cards as either positive or negative. This is decided for each card individually. 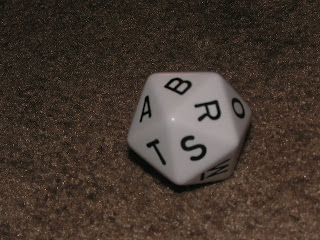 Next, the the die is rolled. Whatever letter the die rests on becomes the Modifier. At this point, any instance of the Modifier letter adds 1 point to the value of every card.

If the Modifier causes a team to go over 21, they Bust back to zero. The first team rest on 21 points after the Modifier wins!

If either team correctly guesses the entire slate (called a Clean Sweep), the opposite team automatically busts, forcing their score to zero (Reclaimed cards do not count as correct guesses)!

If both teams tie with a correct answer the tie goes to the acting team.

A person cannot act again until everyone on her/his team has acted.

If a card's clue isn't guessed and it falls into the slate, that cards points become permanently lost.

Anytime a card becomes Reclaimed, the actor can remove-and thus reclaim-all Stolen cards from the slate if they haven't fallen into the slate.

A score can go above the bust limit before the die roll with hopes that the modifier will bring it back down.